The boring buy and hold strategy has been frowned upon by our “we want it now” generation. If you remember I wrote briefly about the buy and hold strategy in the post titled Basics of the Stock Market for the Beginner (And the Expert) and again when I posted the Jack Bogle interview. I want to dive into more detail explaining why this is the best strategy for investing in the stock market.

The stock market as a whole has returned an average between 8-12% a year, depending on who you agree with and the timeline they use. Below is a graph used by Tom DeGrace showing the returns from 1896 to 2009, averaging 10.4% a year. 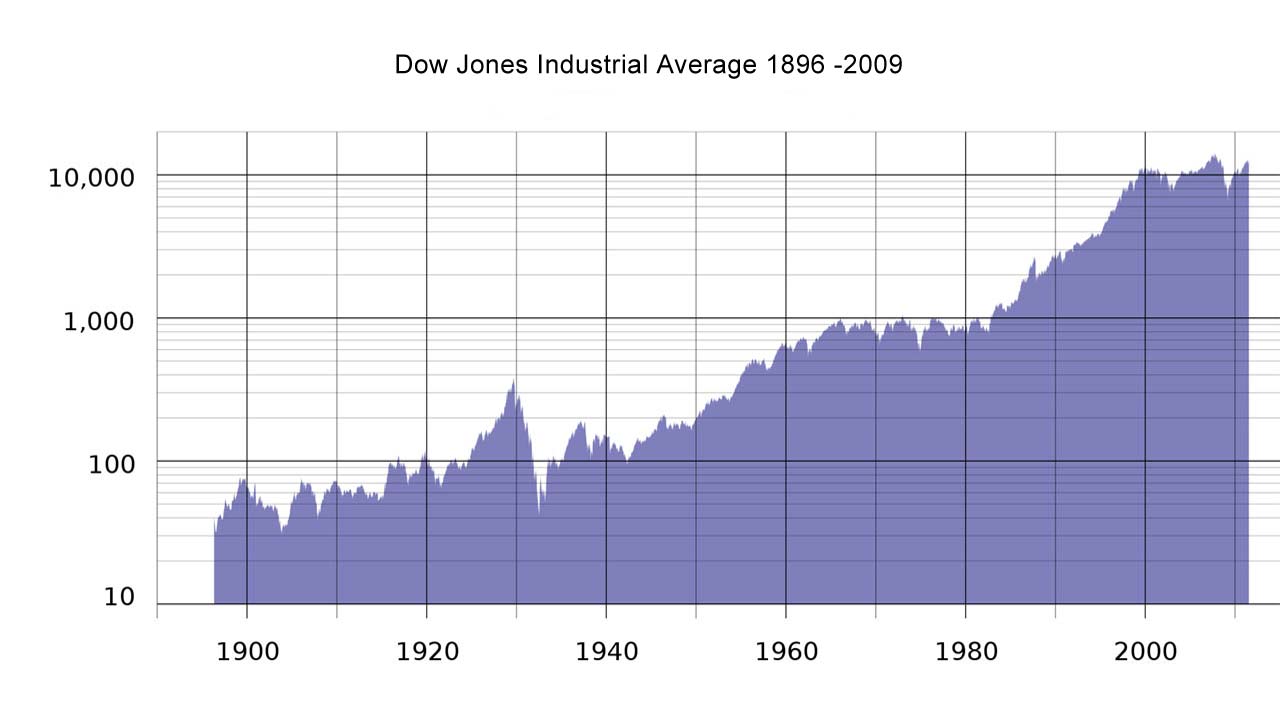 Let’s say we use a conservative return of 10% a year. $1,000 invested today compounding (meaning you don’t withdrawal any of the gains) at 10% a year will be worth over $45,000 in 40 years. That’s 45X your initial investment! The beauty of compounding interest makes this so. Even Albert Einstein was amazed with compounding interest, declaring it “the greatest mathematical discovery of all time”.

“I can beat 10% a year”, some of you are probably thinking, but can you really? In real estate yes, but not in the stock market. The best hedge fund managers in the world can beat the market for only a short period of time, but never on a consistent basis. If you look at the Forbes list of highest earning hedge fund managers, most of them underperformed the recent market gains. Some of these guys are making $400,000/hr to allocate a portfolio, and they’re failing. You think if there was some secret or trick to the market they would either find it or buy it. Another article on Forbes stated, “since the start of 2009 the US stock market has returned eight times as much as the average hedge fund.”

An additional point is the amount of hedge funds that have survived over the years. According to Burton Malkiel in A Random Walk Down Wall Street, in 1970 there were 358 hedge funds, by 2009 there were just 119, meaning 239 funds (managed by professionals) failed. Of those surviving funds only 44 (37%) were able to outperform the market, mostly by 1-2%, and 75 (63%) underperformed.

If they can’t outperform the market then there has to be a reason hedge fund managers get paid so well; it’s the individual investors. The hedge funds will take between 2-3% of the total investment value on a yearly basis as a “management fee” along with a “performance fee” of twenty percent (the two-and-twenty formula). Where as index funds charge no “performance fee” and have expense ratios as low as 0.04%, that’s $4 in fees per $10,000 invested.

Vanguard claims to have some of the lowest expenses in the industry.

The fees from the actively managed funds or from actively trading will significantly impair your profits.

The $10,090 your left with from the 15% gain in the actively managed fund is virtually the same you would have after investing in general market funds returning only 10%. There’s one other important thing to consider, taxes. If you sell a stock within one year it is taxed as ordinary income but, if you sell a stock after a year the capi​tal gains tax is lower. The takeaway; an actively managed fund has to return more than the general market to be a worthwhile investment, which doesn’t happen very often.

There is one other major benefit to the buy and hold strategy; risk reduction. You can reduce your risk in stocks by simply holding onto those stocks longer. The graph below from A Random Walk Down Wall Street best illustrates this phenomena.

The graph shows the annual return on common stocks for 1, 5, 10, 15, 20, and 25 year periods between 1950-2009. You can see the average annual return hardly changes over the various periods but, the longer you hold your investment the less volatile it becomes.

Still think you can out due the market? I did. After I made a killing on my first trade I was full of confidence. “This is easy”, I thought to myself. Which led me to open an Etrade account and begin to actively trading in my portfolio. Since I was trading with only a few thousand dollars I wasn’t making any significant gains after the commission costs, at least not the 100% gains I was used to. So I turned to trading stock options, subsequently losing ~$20,000 in one year. At one point I was making $500/wk then losing $3,500 in a single day. It took losing $20,000 before I finally came to my senses.

Since then I have kept pace with the market by owning a balanced portfolio of stocks and bonds, passively investing instead of actively trading, and using the dollar-cost averaging strategy. Whether you agree with the buy and hold methodology or not, I hope you can see actively managed funds and actively trading are not sound avenues to wealth creation.

Working with Cameron was a pleasure; he was knowledgeable, creative, and prepared. He kept the process on track to meet our timeline, and effectively handled roadblocks. I will definitely work with him again..

WARNING: DON’T SIGN A CONTRACT UNTIL YOU READ THIS!